3 year olds are a trip.  Vocabulary is exploding, energy is endless and emotions are intense.

B has been surprising us daily with her use of words recently.  She’s always been ahead of the developmental curve in terms of cognitive ability- but recently we’ve been marveling.  The other day in the car, she was saying something (she is always saying something- like literally, unless she’s asleep, she’s talking….) and neither David nor I could understand one of the words.  (She has this nasally pronunciation of certain letters going on that makes it difficult sometimes.)  She kept repeating it over and over and I kept hearing “red” but it was clearly not the word she was saying.  In the past when this has happened, she would start crying out of frustration that we didn’t understand what she was trying to tell us.  However, this day she said “No, not red. ‘wet!’ .. like rain!”  I know it seems basic, we do it all the time, using context to get our point across, but it seemed so advanced for our little tiny 3 year old.  Later that same week she was trying to say something that we once again couldn’t understand- something that sounded like “call” or “mall”.  She said, relatively patiently- “No, like little. Not big, but little- ‘SMALL.’”  Small. She was describing, using synonyms and antonyms, the word small.   It’s amazing to me to think that just 3 years ago, she was a 3 month old baby who couldn’t do anything but eat, sleep, poop and smile.

With this blossoming of vocabulary, she is better able to demonstrate her understanding of concepts and express her desires more effectively.  This has diminished significantly the amount of frustration tantrums and general amount of crying.  It’s also allowing us to get to know her as the unique person she is becoming. She tells us great imaginative stories about her and her baby sister escaping jail with the help of nice monsters.  She cried indignantly, “My teeth are too sharp! WHY DID THEY DO THAT TO ME? I DON’T LIKE IT WHEN THEY DO THAT TO ME!” after biting her cheek for the first time a few weeks ago (side note: I was laughing so hard I couldn’t console her as she cried. Good thing David was there). She makes up games to play with hidden coins and shirt sleeves.  She “reads” her books to her sister while occasionally pausing to stroke her face and say “I love you.”  She tells strangers on the street about her love of ballet and demonstrates with no self-doubt her ballet moves she’s learning “Fridays in ballet class.”  She dances with abandon at Zoo light show and tells us in no uncertain terms that she “dances better” than us.  Her teachers constantly tell us how quickly she learns and grasps concepts and how they are sure she is going to be CEO or president of something someday.

I love it. I love her big personality and flair for the dramatic. I love her sweetness and desire to share constantly. I love her love to be around people and her constant chatter about her little best friends. I love her facial expressions that are starting to look a lot like mine and her concern for others that looks a lot like her Daddy’s.  I love her growing knowledge of Jesus and the Bible. I love her desire to learn and constant spelling of her name and Mama’s name. I love it all.

I love it all because I love her. And I love her simply because she’s mine.

And you know what? It makes me proud.  Proud of who she is and who she is becoming.  Proud that I get to be her Mama.  And- yes- proud of the job I’m doing as her Mama.

Don’t get me wrong, there are pleennntttyy of days I’m not proud of her behavior – or mine for that matter.  Her booty has a comfortable spot in the timeout corner and I threaten to unplug her purple lights or turn off her music at bedtime more often than I’d like. She bit her best friend at school out of the blue a few months ago (having no history of being a biter) and guys- I. Was. Mortified.  With her expanding use of words and knowledge of concepts has come the innate human tendency to lie and use that intellect for sassing.  Her strong independence I prayed for when she was in my tummy was granted and is now being demonstrated with glares and “hmmphss” and “That’s not fair!” and “I DON’T WANT TO TAKE A NAP! I’M NOT *yyaaaawwwnnnn* TIRED!”.  Also… did I mention she’s three?

So yes, sometimes I apologize for B’s outbursts or joke about how cray cray she is because she is at 100% energy All. Of. The. Time. But actually- I feel like her Daddy and I are doing a pretty good job at this parenting thing.  When I think about  my childhood- I don’t remember the times I’m sure my parents were embarrassed with a tantrum I had.  I don’t remember my parents holding the door shut to my room because I wouldn’t take a nap (supposedly this happened but who knows for sure 😉 ).  I remember being put in “VTO” (“Verbal Time Out”- how the heck did they get this to work?) but I don’t have negative emotions attached to those memories.  Because my parents did/are doing a heck of a job as parents.  And by that I mean they made sure we understood the most important concept a child should learn from their parents– I knew I was loved.  I knew I was loved no matter what. No matter what I did or said or broke. No matter how much I disobeyed or talked back.  No matter what.

I knew I was loved. And I still know it to this day.

I don’t mean by any stretch am I a perfect parent. Because I am far from it. But I do think I’m getting the important message across.

And after I saw her little face break into tears and saw her shrink back against the couch after I got mad at her- I pulled her close and said “I’m sorry I snapped at you. I was mad because you hurt me, but I shouldn’t have reacted that way. You know mama loves you right?” she looked at me, clutched me tight and said “I know, Mama.  A lot.”

And I believe her because she does know. Her little words demonstrate big understanding.  My little girl knows I love her.  And that means I’m doing a heck of a job as a parent.

With it being the beginning of a new year, I’m seeing all these posts about resolutions with #NewYearNewMe attached to them.  And sure, I have goals I’d like to work towards and growth is always something to strive for.  But when it comes to parenting, overall- I look forward to 2019 and all the “I know, Mamas” I’m going to hear by being the same ol’ Mama that loves her babies fiercely. 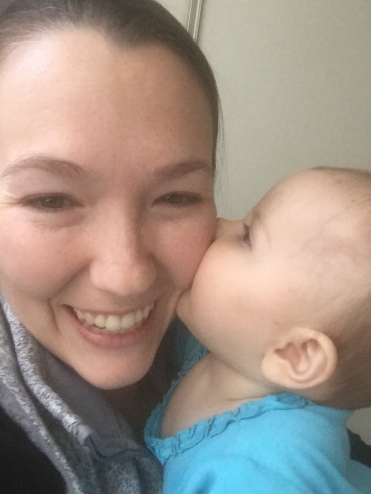 Thanks for reading the overflow of my mind and heart! I hope it is encouraging to know there are other people out there just making it up as we go along!